Medicinal Honey from Israel May Hold Promise for Chemo Patients

By Julie A. Sergel 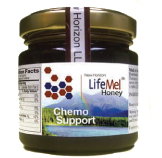 Honey developed in Israel--newly released to the US marketplace and abroad--may offer much needed fortification for those undergoing chemotherapy treatment. After 30 plus years of research, Life-Mel Honey shows promise for those undergoing the rigorous demands of cancer treatment by improving blood composition and overall wellbeing.

Based on the concept of apitherapy, where bees are feed medicinal herbs in order to produce a more potent byproduct, Life-Mel honey has shown considerable potential in clinical studies by lowering incidence of developing anemia, leucopenia, neutropenia and thrombocytopenia—costly byproducts of chemotherapy. Also in the study 64 percent of patient’s hemoglobin levels improved and 32 percent reported an enhanced quality of life.

Although the medical community tends to weight more on governmental approval and sponsored studies, for those in the trenches wrestling with cancer first hand, many times best bets are places on other people’s experiences, a.k.a. testimonials. This is where the honey really begins to flow. Responses like Canadian Dr. Heime Geffen’s ordeal with Acute Myelocytic Leukemia and his dangerously low white blood cell count (1.2) and overall deteriorating blood composition due to chemotherapy, notes turn around with Life-Mel. Others, like “Ronit from Haifa,” “Ester from Alfei Menashe,” “Odette from Karkom” and “Lea from Rosh Pina” express vastly improved blood levels and renewed vigor by use of the honey, and prompt others to give it a try.

Some patients are more apt to continue on with cancer treatments without interruption. A UK newspaper (Daily Express) reports on Robert Brunt, age 48, of Plymouth University, after his integration of the potent honey into his chemotherapy regime. “I have lost a little hair but that is growing back. I sometimes feel tired and a bit sick but apart from that I have had no side effects at all. My blood counts have always been high.” Not only does Brunt credit his ability to sail through treatments without ill effects to the honey, but he also explains that he offered to have two extra cycles of chemotherapy (eight in all) “because I felt so well.”

And that’s the thing, said Michael A. Baker, US spokesman for Life-Mel, it’s not the cure for everyone, but certainly if it works for you, you will know soon enough. It doesn’t take months and months, I am told—more like six to eight days--for strength and improved blood counts to post if it’s the right match.

Dr. Alexander Boroshit, of Russia, is largely responsible for development of the product. Herbs inscribed on the menu for the bees to feed on include Siberian Ginseng, Echinacea, Bilberry, Fig, Elecampane, Lemon Balm, Black Currant, and more, along with iron, protein, and vitamins. The benefit of ingesting the therapeutically infused honey product verses the herbs on their own, is that you are getting a more amplified response, according to Baker—a more holistic remedy.

Directions on the bottle offer instructions to suck on a teaspoon twice daily for about three minutes. What this does is offer the body a continued gentle dose that is readily absorbed into the system, acting as a wholefoods based remedy rather than a more generic pill or capsule type dose.

Two varieties are available—“Chemo Support” and an “Immune Support” version, the latter running about twenty dollars cheaper. The potency lessens a bit too, as this formula is suited for those no longer undergoing chemotherapy but who’d like to stay strong or for individuals in the general population wanting to boost immunity. UK markets include Harrod’s department store where Sienna Miller and Kylie Minogue are supposed fans, and where it’s being marketed as the most expensive honey in the world.

The sweet stuff may be expensive in retail but cheap in medical practice. The goal is to get the honey into more hospitals worldwide. It’s far more economical in comparison to using secondary rounds of CSFs (colony-stimulating factors) that are many times employed when the body starts to break down under harsh chemo treatment—carrying with it another set of side effects. Other honey products are also on the horizon for various ailments.

Partners Moshe Begim and Yaron Shmueli are responsible for US distribution. After Shmueli’s father-in-law died from carcinoma of the digestive system, he found himself hungry for answers and solutions. A newspaper account of the honey generated interest and action. For more information and ordering procedures, visit Life-Mel Honey at www.lifemelusa.com.

Editor’s note: The Jewish Post staff does not have the proper scientific nor medical background to critically evaluate this product.  However, as an individual who has seen his mother-in-law painfully suffer through chemotherapy, I’ve found that keeping an open mind to new solutions has often been encouraging and occasionally very beneficial.  It is in this light that we present this potentially important new product from Israel.  As always, please consult your medical professional before using any new medical product.


Return to News ArchivesBack to Top